I fear this poor little blog has been sorely neglected of late. Unfortunately, the reason for that is pretty much down to a severe lack of crafting over the past couple of months! The craft pit has been all but unusable after I started a full-on tidy-up/clear-out/reorganise way back in November but the process then got stalled by the events of December/January - not to mention me then being laid low by flu over the Christmas period!
However, I have deadlines looming (and the urge to craft is strong - it's the space to do so that's lacking!) so I've kicked my backside into gear and at least cleared enough space (just about!) on the desk to work in and have set to work.
Which means I actually have something on my desk to share with you on this windy Wednesday! :) 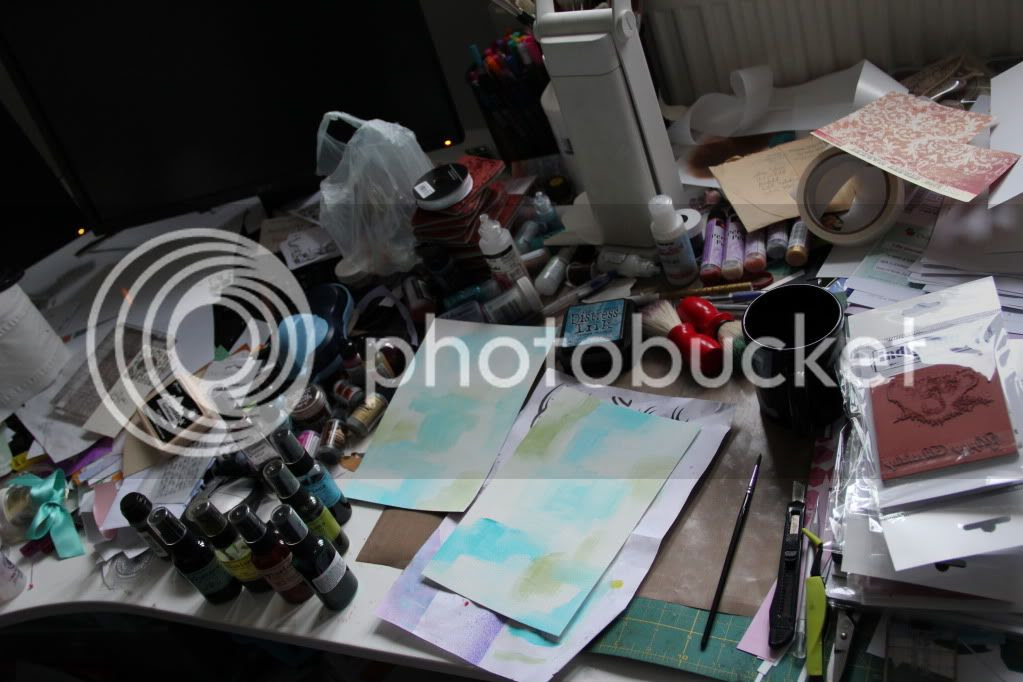 Gracing the preciously small space in the centre of all the clutter are some in-progress art journal backgrounds. I gesso'd and painted them last night and they are now awaiting further inking/spraying/painting/stamping and journalling. Which is hopefully going to happen tonight.
The big tidy is still going to happen - it HAS to, I've literally got a small path from the door to the chair and a small space on the desk and the rest of the room is disaster!! - but in the meantime I am at least crafting again. :)

Beautiful backgrounds! That is exactly what my space is like sometimes. Nothing but clutter and a small path to get there! Happy WOYWW! --Meechelle #114

Hi Ali, nice to see you back recovered from the past couple of months and busy with those journal pages. Good luck with the big clear up and have a good week. Elizabeth x #96

Loving your backgrounds, I am sure you will turn them into something gorgeous very soon... Seems everyone is trying to tidy/reorganise at present. I am meant to be having a big de-clutter (not of crafty stuff, obviously!!!!) and it's stalled already...

I'm seeing how many I can get round this way.then when I have finished I'll come back again, that is if I can STOP reading all the posts first Happy WOYWW

Welcome back to the craft world... I can't wait to see what goodies come out of your craft area. Happy Crafting :)

Yea! Let's hear it for crafting again! It does wonders for the soul. Sometimes I find cleaning and sorting the stash really inspires me so think of tidying as a positive then and not something awful. That will help!

Good to see you back and hear of new creative energy - enjoy the new gusto! Thanks for the peek in to your crafty space...Sarah at 6

And now I've seen those in progress pages complete and IRL, I'm astonished that you managed to create such beautiful pages in such small a space, without covering everything else with mist or paint or both! LOL

I'm not trying to be preachy...but since I got organized and straightened up...well not me...my playroom...I get tons more done!!! Hope this finds you with lots of energy to make the progress you want to make!