*Ahem* Remember how I was having a big tidy up and clear-out in my craft room?
Yeah. Not so much, as it happens. :/
I got part way through the process and then got derailed. Initially by interference from hubby who decided to have a bit of a tidy himself... unfortunately, his definition of "tidying" basically amounts to picking up everything that he thinks is where it shouldn't be... and dumping it in my craft room/office! I have tried to point out to him that this isn't actually tidying, it's just dumping stuff on me so that I have to tidy it, but he can't seem to see how this is an issue. :/
So I've had to hold off on the craft room tidy until I can clear away the extra layer of crap that hubby added to the chaos, and on top of that I've had to abandon tidying anyway in favour of prepping for a workshop tonight.
So this is what the craft pit looks like this morning. *sigh* 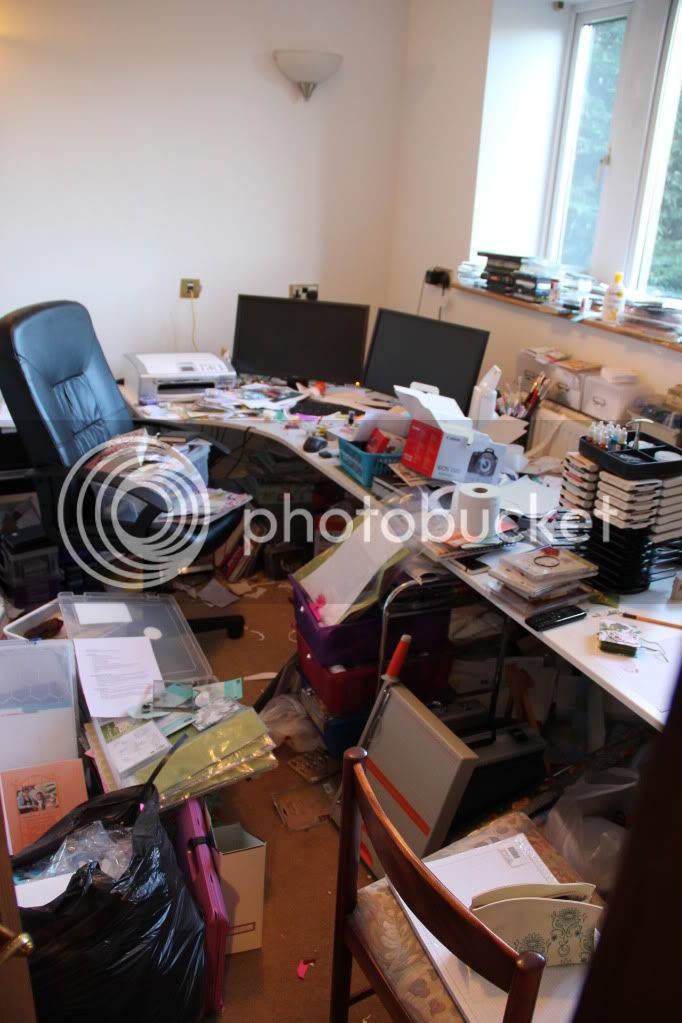 The floor space is mostly taken up by a giant bin bag of rubbish, various bits and bobs mid-sort out, and my artbin box being packed for the workshop. The usual work area of my desk is buried beneath crafty stuff and stuff that hubby dumped: 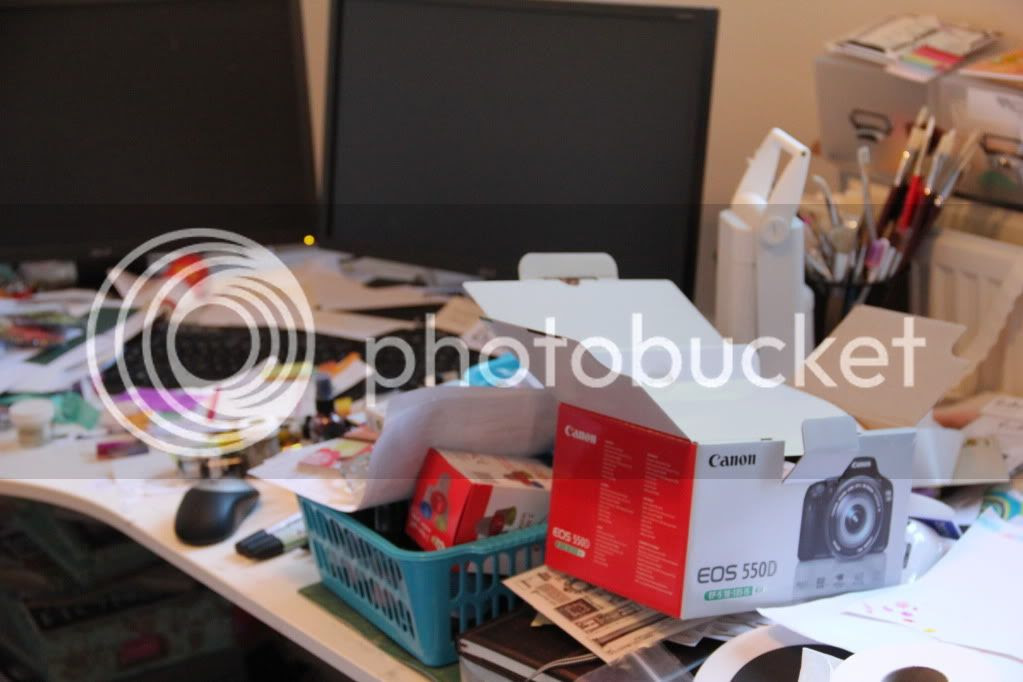 And I've had to do my crafting/prep at the other end of the desk, which I had previously cleared! 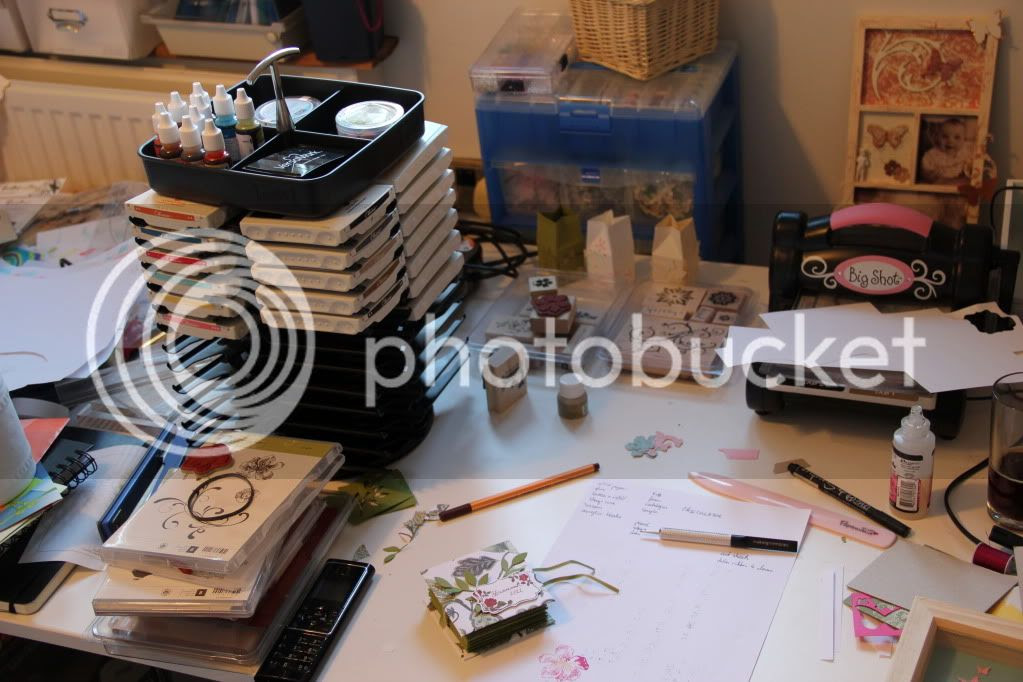 One nice feature of the newly-"recovered in crafting debris" desk though is that I finally got around to getting a fabby Color Caddy for my Stampin' Up! inkpads, rather than having them piled up loosely in a box on the Expedit. Now I just need to work on filling it! :lol:
Thanks for stopping by my desk - have a fun WOYWW and I'll hopefully have a tidier room to share next week! :lol: (I always seem to say that, don't it?)

Email ThisBlogThis!Share to TwitterShare to FacebookShare to Pinterest
Labels: Stampin Up, WOYWW

What a busy desk you have lots of stash, my husband would never tidy my room, the little project looks super cute you are working on. Have a great Wednesday. Laura

My OH used to do that to my craft room too and then it got worse when we started to "share" it as a study/craft room so I have now moved out and into the dining room! its cluttered but at least its cluttered with my stuff and now I can dump any other stuff on him in his study - hah! You will feel fab when you have a tidy up though - really good thing to do to get the creative juices flowing again! Thanks for sharing. Sunshine Girl – No 4

Lol, my hubby has a "study" that I hardly go near, you take you life in your hands going in that room I can tell you! He also likes to dump things in my room too from time to time.

No! You really have been dumped on! Good luck.... there is lots of crafty yumminess though!

Looks as though you have a job and a half on your hands there - good luck!!

Mmmm thought for a moment someone had posted a pic of my craft room on your blog!! Tidy rooms are boring I keep telling myself but then why do we always feel so smug when we have tidied up? Obviously lots going on in your room hope you have a happy crafty week x

My room has a very similar resemblance Ali. In fact I've given up going in there unless i need something. I've moved into the kitchen now. My excuse is it's to keep the dog company but to be honest I just can't face tidying the 'junk' I mean 'craft' room!

Hope your w/s went well today. Been thinking of you.
J x

gosh that is messy. my handyman does that sometimes, although to be fair to him it is usually my stuff he dumps in there. I love your new ink caddy would Distress inks fit in it if so please tell me where I can get one
thanks for sharing
janet#37

Hi there and thanks for the peek into your creative zone. It looks like there is loads going on so thanks for sharing. Hope you have a brilliant week and have plenty of creative time!
Neil #23

Ooh idea- you can reward yourself for all the tidying by buying more inkpads!! When you get to it - clear the decks completely, then you canhoof it all off the floor to sort and clear..makes everything look instantly as if you're really getting somewhere! Good luck!

Now that's what I call a really creative persons desk.

Hi Ali, dare I suggest that you just pick up hubby's stuff and dispose of it altogether as he clearly doesn't want it - or is there a danger that would start WWIII. We have a rule in our house that if it hasn't been used/referred to in some way in the last 12 months then it is probably excess to requirements so toss it or donate it to charity - we like donating to charity :)) Hope your workshop went well and you enjoyed yourself. Elizabeth x #111

My hubby used to be the untidy one and I was the neat freak. These days though, I haven't got any spare energy for tidiness and our roles have been reversed! Actually he's got a lot tidier so it's not both of us making a major mess! He respects my space, as I do his - his study looks like a constant state of WW3 but he's much better than he was!

Love your gloriously chaotic untidy creative mess! It's a lovely light room, and just thing of all the lovely loveliness that's coming out of it. Shoshi #61