A rather short WOYWW post from me this week because, sadly, there is very little to share on my desk this week. I had every intention of crafting last night but DH threw a spanner in the works by deciding to drive down to London in the early hours of this morning, as opposed to last night - meaning we had to go to bed ridiculously early! :/
So here's my desk: 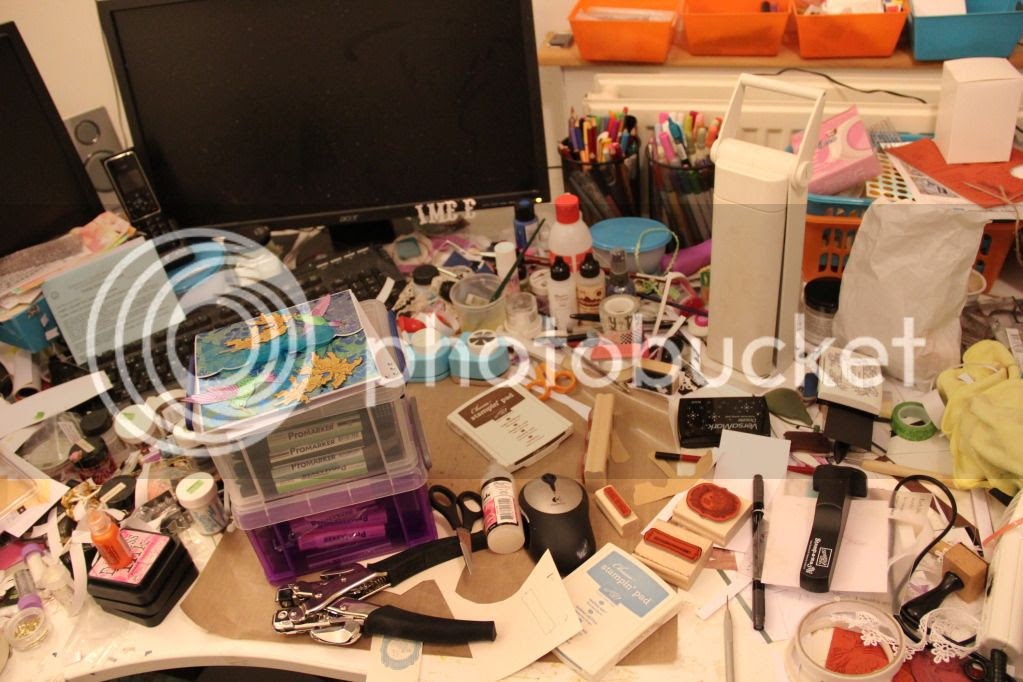 The little workable crafting space is piled high with remnants of recent crafting - boxes of Promarkers, stamps, inkpads, Cropadile, a couple of recently completed cards. All of which will be shoved to one side to make space to craft when I get my postponed evening of crafting tonight! :)
On the plus side, the reason DH is driving down to London in the middle of the week instead of on a Sunday night is because on Monday I finally - finally! - nearly 2 months after it starting bothering me, had my troublesome tooth removed! Yay! I had to have it removed under IV sedation - after two failed attempts to get it out under local anaesthetic - which meant that I couldn't drive afterwards and couldn't be in sole charge of two small children afterwards! So DH took two days off work to drive me to and from the appointment and to kiddy wrangle while I was still wobbly.
So, silver lining to every cloud, I guess. :)

A lovely mess! Love your desk, now I know mine is normal! hee hee thanks for sharing.

A delightful mix of goodies on your desk. Hope all goes well with the tooth extraction ...ouch.
Sandra @10

Your desk makes me feel right at home (he he). Excellent that you finally got that tooth out and got hubby home for two days :)
Have a great week and I hope you are crafting again soon.
Von #39

Wow what a serious frenzy of stash & activity ! Hope the tooth removal heals up nicely & you will be pain free now ! Enjoy tonight's crafting ! Ali x52

lots on your desk , lovely humming birds on your card. hope your feeling ok after the tooth removal. Jill #61

Oooh great busy desk there - hope you are feeling ok after having your tooth out. Thanks for sharing - Sunshine Girl No. 54

My name is Cindy said...

Ooh looking busy -I too am a devotee of the 'push it back' crafting but you might be reaching critical mass soon lol.... Happy WOYWW Cindy #78

Glad you have finally had your tooth out, hope all feeling better now. Your desk is fab Ali and love peeking at it.

oh wow, your desk looks very busy, my desk always looks tidy but then I have a whole room to spread the mess out in.
Hope you are feeling ok after having your tooth out.
Jan S 94

Your desk looks like it's patiently waiting for you to come back to it. Hope your tooth/gap where tooth was is better now.

What a cool jumble of goodies waiting for you! Nan 19

Oh my, that was one troublesome tooth. i bet you feel much better know that it's gone. Brigita #117

Thank goodness you have that tooth sorted at last - what a marathon that turned into! Love your busy desk as usual! Happy Wednesday. :o)
Sue x (MiniOwner@95)

Love your desk, looks just like mine LOL. Glad to hear you had that nasty tooth removed, you'll be feeling so much better by next week.
Krisha #45

It looks like you have busy at some time recently, even if not last night. Hope you recover from the dental issues soon.
Carolyn #107

After the pain comes the gain! Glad the tooth episode is over and you had a couple of chid free (ish) days even if you were in a haze of sedative! We have to take what positives we can out of situations like that :D
Hugs, LLJ #58 xx

Hopefully your tooth feels better now and you can have some fun with hubby house/family site!

I was going to say how inconsiderate of your DH to make you go to bed early but as he looked after you and your family so well I think you need to forgive him this once!!! I'm glad you got your troublesome tooth sorted, never nice.
Happy WOYWW
Hugs Lisax 71

So many promising projects awaiting you on your workdesk! I hope that you are feeling better and were able to create a bit! Wishing you a happy day!

So glad you've had your troublesome tooth sorted out for good. Hopefully you have been able to get on with some uninterrupted crafting time since. Elizabeth - later than ever this week - x #75