It's official. I'm addicted. :)
Ever since getting the new Cameo set up last week, I haven't made a single card without using the Cameo to cut something for it! :lol:
Last night was no exception... I had a really productive evening, making three cards, two of which can be seen on the desk in this morning's photo, and all of them featured embellishments cut with the Cameo: 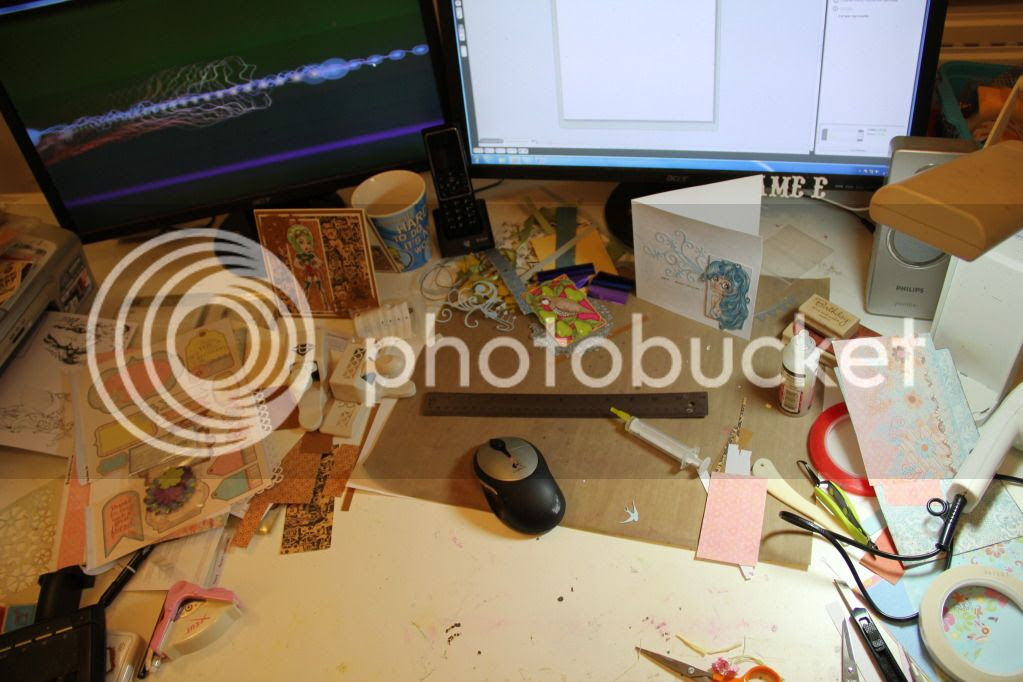 I'm having so much fun with this machine! I love being able to cut fab designs in whatever size I want and without having to get up from my seat at the crafting area. :) It's so quick and easy! I also got the machine at just the right time as until last weekend everything in the Silhouette online store was half price - so I snagged a whole load of fab cuttable images at bargain prices. :D
Other than playing with my Cameo, I've been doing a lot of colouring of digi images lately. When the nights are cold and dark and the sofa is comfy and the fire is on, it can be hard to drag myself into the craft room... so I compromise and sit and colour digi stamps on the sofa. Which is probably why I was able to do three cards last night because I had a bunch of digi's coloured and ready to work with. :)
If you're wondering why I'm wittering about what's on my desk this morning, it's because it's What's On Your Workdesk Wednesday, the biggest weekly blog hop of crafty desks the world over. Check out the master list at Julia's Stamping Ground blog.

Thanks for stopping by!

I really should proof read my posts before hitting the send button! Sorry!

Hi Ali, ooh lucky girl, I have wanted a Cameo for ages but with two die cutting machines already, I can't justify it - but I am now thinking again...... nice card on your desk, great flourish. Happy WOYWW, Anne x #49

Isn't it great to get a new craft product you love so much? We're migrating into the lounge more now the weather is colder, it's the warmest room in the bungalow.

Cute little card there on your desk. Now that it is colder I tend to do a lot of coloring on the sofa too, plus I can see my Christmas tree.......I do enjoy the sparklies!!!
Krisha #96

Glad to hear you are enjoy your new toy :). Always sooo much fun!!

Yup, new toys are so fun. Like that swirl you cut on the card (upper right corner). Happy WOYWW
Karen 97

Very cool to hear you're getting so much use out of your new toy! Happy WOYWW!
Alison x
#40

Oooh very productive! My friends are all busy playing with their silhouettes too but my old craft robo is still sitting in a drawer at the moment! I so must get it out and replay with it! Have fun. Sunshine Girl no. 21

Looks like lots of fun is being had with your new toy. Enjoy BJ#47